Carolyn
A Connecticut Yankee who’s found her court in Brooklyn, Carolyn has a passion for each and every one of New York’s boroughs. Her cat Emily is named after Emily Warren Roebling who saw that construction of the Brooklyn Bridge was completed after her husband got decompression sickness. If she could have lunch with any New Yorker from the past, she’d probably choose Jane Jacobs, partly because she saved many of the city’s neighborhoods from demolition and partly because she had a great sense of humor. Before she became a tour guide, Carolyn comprehensively studied the great books at St. John’s College in Maryland. When she’s not guiding, she’s the Chief Operating Officer of Salty Road, a salt water taffy company in Brooklyn.

Matthew
Matthew is Patchquilt’s lead historian and activities coordinator. He doesn’t let it go to his head though, unless you challenge his knowledge of Central Park in a crowded bar. Even then, he’ll just bug you to buy him a drink… not flavored sparkling water. Matthew’s been featured on the Biography Channel and the History Channel sharing New York history. He graduated with a degree in Interdisciplinary Studies from the University of Nevada Las Vegas, and when we don’t have him locked in a room or out with people, he’s an actor and has appeared Off-Broadway and regionally.

Seph
Originally from the great state of South Carolina, Seph is now a New Yorker through and through. If you’re ever in the mood for pizza, not only will he share his favorite places, he’ll probably join you. A graduate of Furman University, he currently lives in Washington Heights but one day he’ll live on Roosevelt Island. Seph is a city history sponge. Be careful not to ask him too much about architecture as it’s difficult to stop him once he gets started. In addition to guiding, Seph works on new events for Patchquilt and is an award winning actor and singer. He’s appeared Off-Broadway, at Carnegie Hall, with the Metropolitan Opera, and with the Gilbert and Sullivan Players.

Elizabeth
Whether taking tourists to the Statue of Liberty or back in time to the Harlem Renaissance, Elizabeth loves helping people see New York the way she does. Though originally from Texas, Elizabeth would like to remind you that most great New Yorkers were born somewhere else. She attended the University of Washington and when she’s not talking about New York, she is an actress. You can see her on stage or on television series like 30 Rock, Law and Order SVU, and The Sopranos. Elizabeth is married to a great guy named David. 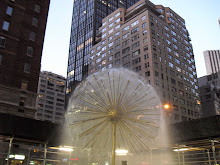